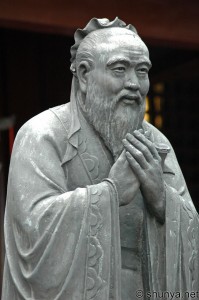 Confucius (or K’ung fu-tse, Kongzi, or Kong Fuzi) was a late 6th/early 5th century BCE* scholar whose greatest hope and wish was to be a government official, and he spent years cultivating a philosophy of good governance that would later be so highly respected that it was an essential study in the curriculum of all noble families and bureaucratic hopefuls.  Unfortunately Confucius never did get his wish, but his students were highly sought after and often attained high ranks and praise for their insight.

His teaching and philosophies were written down in many works, the most popular of which are the Analects of Confucius.  Other writings are The Classic of Filial Piety, the Great Learning, and The Doctrine of the Mean. For the greatest length of time, anyone who wished to be a bureaucrat would have to go through years of study to understand these writings, with be tested on them for separate levels of government work.

His philosophy became so popular in China that it came to be known by his name.  This philosophy holds a few inherent ideas such as the notion of Ren (Humanity), Yi (Justice) and Xiao (Filial Piety – the act of respect of ones parents), and when all of these concepts are put together, Confucianism is considered a predominately “Humanist” practice.

Of all of the virtues proselytized by Confucianism, Ren (Humanity) is one of the most fundamental.  It is the spirit of altruism and recognition of others, or ‘reciprocity’; best expressed from his discussion with a student written in the Analects, “The master replied…what you would not choose for yourself, do not impose on others.”  Confucius held that all people are born ‘right’ and ‘just’, and it’s through a series of negative events that this inherent propriety is lost, and people learn to be bad… Or lose “Ren”.
This concept of humanity in the philosophical sense would carry over to Confucius’ political views in that a ruler who exhibited Ren and Yi would be the best rulers, and consequently should be strictly obeyed – as this ruler was following the mandates of the Will of Heaven.  A ruler who did not, wouldn’t long have their position and society would fall into chaos and war.

Filial Piety (Xiao) is also a major concept in Confucianism (as mentioned above) as it detailed society responsbility and propriety regarding appropriateness of interaction between people.  This concept of respectful interaction with one’s parents would extend to create the notion of the five relationships – Ruler to Ruled, Father to Son, Husband to Wife, Elder Brother to Younger Brother and Friend to Friend.

These five relationships were listed in order of precedence, with any relationships outside of these parameters giving heavy consideration to elders, and each category had specific duties expected of them… even into death.  An eldest son, for example, was responsible for the maintenance of the resting site for the family, and ensured that all rites and rituals were performed appropriately.

This notion of filial piety influenced the entire Chinese government, including the legal system.  The practice of Xiao was an expression of Ren, and those who dutifully performed their responsibilities of their role to their family ancestors/predecessors was seen as a just and humane person.  Consequently, if a person committed a crime against a member higher on the list of precedence, they would be treated more severely than the other way around.

Later students of Confucianism would take some of these concepts further, and expand on the framework that Confucius created.  Mencius is one of these students who, in their own right, would become synonymous with the Great Master and his interpretations are quite often taken as attributed to Confucius himself.