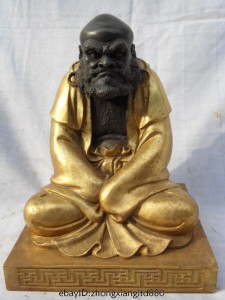 I bet you’re wondering who this “mean-looking, grumpy old man” is, and what he’s doing on this page.

His name is Bodhidharma, and he is one of the most influential people most of the world has never heard of.  Many people are likely to have seen his intense image in different forms of art, but few actually know who he is.

Admittedly, he doesn’t look like the stereotypical “wise man” that you would normally see in classic Chinese art, but this is one of the most influential figures in Chinese Ch’an (or Zen in Japanese) Buddhism – he is one of the most famous Chinese figures in Martial Arts history as well, and he wasn’t even Chinese!

According to legend, he was an Indian (from India) monk who travelled to China in the 5th/6th century of the Common Era for the purpose of spreading Mahayana Buddhism.  Once he got there, he noticed that the Buddhist monks of the Shaoshi mountains were sickly, unfit, and otherwise unhealthy… He taught them exercises to counter this, all in line with Buddhist doctrine of the time, and these monks would later form the earliest generation of the famous Shaolin Monks.
For the record, this is anecdotal as it is according to legend; there are some academics challenging the authenticity of this claim based on the source material, but the story is still believed by Shaolin Monks as this man is also their first Patriarch of Ch’an Buddhism.

What this means is that Bodhidharma may have gone to China to spread Mahayana Buddhism from India – which was the second incarnation of Buddhism that occurred around the first century before the common era (BCE), challenging the old thoughts of the Theravadan practices – and later developed the meditative interpretation we now colloquially call “Zen”.  (For more information about the different sects of Buddhism, have a look at the earliest three – Theravada (Oldest), Mahayana (most popular in modern era, including offshoots), and Vijrayana – and then see how they split over time).

Interestingly, it is highly likely that Bodhidharma taught the monks of the Shaoshi Monastery the Indian practice of Yoga, making the development of Martial Arts of all types rooted in the jewel of yoga brought east via the Silk Road…

Other legends say that he meditated facing a mountain wall for nine years, only fell asleep once (accidentally); a situation that he remedied immediately, and prevented himself from succumbing to again by ripping out his eyelids and throwing them on the ground.  This is why he has such an intense stare as well as where the first tea leaves came from, as his discarded eyelids took root and became tea plants.

You may also note that his images don’t carry with them the ‘serene calm’ that most other “Wise” persons in Chinese history are usually described as having, which may be the result of intercultural bias – something that we (rightfully) try to avoid in modern times, but was rife throughout history.  This is why he looks so rough; unkempt and unshaven, with the missing eyelids, he was considered a very sombre individual and not as physically attractive by Chinese standards – a stereotypical opinion of Middle Eastern people by Chinese persons at the time.

Ultimately, physical attributes aside, his legend is inextricably linked to the cooperation between Martial Arts and Religion / Philosophy; through his inspiration and development of the Shaolinquan (Fist of the Shaoshi Mountains) and his branching off of Mahayana doctrine into Ch’an, he illustrated that development of the body (with Martial Arts as a vehicle) is a functional exercise in the search for enlightenment.