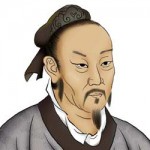 Mencius (aka Mengzi or Meng-Tze) was a 4th Century BCE Chinese philosopher, who is the most famous Confucian second only to Confucius himself.

Confucius’ writings were very short and rather succinct, while Mencius wrote in long arguments and prose.  His views on human nature were that people are inherently good and it was society that caused people to fall out of this good moral character.  His argument is clearly illustrated in his analogy of a child having fallen down a well, and how people would react.

One of the major differences between Confucius and Mencius is on their views of the Will of Heaven:  While Confucius would hold that the Will of Heaven would raise and topple a leader who was aligned or misaligned, Mencius argued that a leader’s subjects should take actions in their own hands to overthrow an unjust ruler because otherwise the ruler was an usurper.  It was the subjects duty to overthrow an unjust ruler.