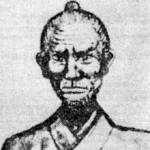 A famous sketch of “Bushi” Matsumura

The man known as Matsumura Sokon, later known as “Bushi Matsumura”, was born sometime in the late 18th century CE, although the exact date/year is unknown.  What is known is that he would become a martial arts master, and teach some of the foundational forebears of modern karate: Itosu, Asato, Motobu, Kyan, and Kentsu (to keep the list relatively short).

To briefly mention Bushi Matsumura’s influence on modern day karate, his students Itosu and Asato Anko would go on to teach Gichin Funakoshi, the founder of Shotokan, while Choyu and Choki Motobu would continue in their masters style of Shuri-te.

Matsumura Sokon was the student of Tode Sakugawa, a Chinese ambassador to the Okinawan islands in the 18th century.  He trained under Sakugawa for six years, until his master’s death.  There are a great many rumours of where he went to train after this time, but he had already learned a great level of skill in this time.  It is believed that he would remain in China for a little longer than the six years that he was there with his master so as to consolidate his training, perhaps even at the Fukien Shaolin Monastery.

Matsumura Sokon would adopt the Kusanku kata (aka Kandu dai) that his master (Sakugawa) created in honour of his own master (Kusanku), but would also pass down many of the foundational kata’s that can be seen in so many different styles: the Nihanchi series (aka Tekki), the Passai (Bassai) series, Gojushiho, and Chinto katas.

The kata that Matsumura is believed to be best known for is Passai (Bassai) Dai, which can be seen here.

The generally accepted father of modern Karate, Master Gichin Funikoshi, was also taught by Bushi Matsumura, as his master (Itosu) would bring him to train under his own master (Matsumura).  This would be one of the major reasons that the various systems that have sprouted from this lineage seem to have the same forms – most Japanese karate that comes from this lineage will have the katas listed above in some form or another.  Something else along this line is that Itosu Anko would later take the Kusanku form and break it into what we now know as the Heian series, which are shared across a great many styles.

A majorly influential figure in the development of modern Karate, the stories of Bushi Matsumura’s life and experiences are (in my opinion) quite interesting… although, some of the stories can be rather curious… either way, enjoy! 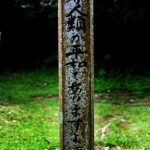 Pole in grove where Matsumura used to train, reads: May peace prevail on earth.

Some stories about Bushi Matsumura:

Matsumura Sokon was well known for his martial skill and married a lovely woman from a very well-known martial arts family of the time; occasionally there would be questions about who was better…  this wasn’t something that Matsumura had much curiousity of, until one day when his wife proficiently defended herself against three brigands.

After a party began getting rather boisterous in Naha, Matsumura sent his wife home, alone.  He followed along the same path that she took a few hours later, finding three beaten men tied up together by his wife’s obi (belt) in the local temple with the temple prayer pole lying across them.  So, apparently, he was curious about the previously posed question – and he sent out to test his wife’s skill.

He dressed up like a farmer, smudged his face to hide what he looked like, and hid along the side of the road where his wife was returning home.  He jumped out, hoping to knock her down – instead, she took him to school… and, like she did with her previous aggressors, she tied him to tree.
He would eventually get out, and later went out to see his master… and learned another lesson.  He would eventually try again, employing his newfound knowledge, and subdued his martially skilled wife (which, if you think about it, is both tenacious and stubborn); she later applauded his development, saying that she knew he was the farmer, and now he knew how to deal with any type of attacker – male or female…

But this is not the story that he is best-known for; that is the bull fight.  The Okinawan King received a bull as a present from the Emperor of Japan, and he was curious if Matsumura Sensei would be able to fight it, and set this competition up.
Matsumura Sensei asked the bull-keeper if he could see the majestic animal, and was allowed to do so.  He visited a great many days, each time he would poke the bull in the nose until the animal eventually feared him.  On the day of the competition, the bull was released, snorting and stamping on the ground, bringing the crowd to an awed fervour.  Matsumura Sensei came out dressed in his battle gear, and when the bull caught his scent, it ran away screaming in mewling.  It was this day that the Okinawan King gave him the nickname “Bushi”, for his warrior spirit… although, it might have been better if he had been given this title for his planning skills!
He would, also, become the King’s Instructor…

The third, and possibly most significant contribution that Bushi Matsumura made to Martial Arts happened a little by accident.  He is believed to have been shopping in a pipes shop when the proprietor asked him for a lesson.  Matsumura declined, stating that he was the King’s instructor, and could take no other students because of this.  The proprietor would then challenge him and Matsumura reluctantly accepted the duel.  The time and location chosen, the proprietor went out a couple hours early the next morning to get the lay of the land, and try to gain the upper hand from this.  After spending some time, he was almost ready when Bushi Matsumura called out his name and told him that he had been waiting for him for awhile… The proprietor knew that he was outwitted, and that Matsumura would know the lay of the land as well, stunting the proprietor’s advantage… which unnerved him.
He took up his kamae (fighting stance), and did nothing – his mind racing, trying to figure out what to do…
Bushi Matsumura called out to him, challenging him to do something – but the proprietor could do nothing.  He was stunned by his indecision, cowed by the imposing stature of Matsumura Sensei and his confident, baritone voice.

Eventually, the proprietor tried to circle around for a better vantage but, as this was not available, would just scream and try to attack.  Instead, his body betrayed him… He was unable to muster the courage to attack, and simply fell to his knees and sobbed.
When Matsumura Sensei came to him, he said “Do not be ashamed.  Your mind was so focused on winning, you could taste it.  It was your only thought, and it is was defeated you.”
He would caution all of his students that the hunger for glory and vanity would end in defeat.