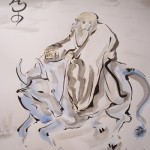 There are concerns and contentions as to exactly when Lao Tzu lived, and if he lived at all.  Some scholars contend that Lao Tzu (a title more than a name, and literally translates as “Venerable Master”) was a fictional character that a myriad of writers would ascribe their writings so that they would be accepted by the populace.
For the most part, Lao Tzu is considered to be a contemporary of Confucius in the 6th century – which, if it is ever determined that he was from the later centuries will likely have some minor impact on the perceptions of the relationship between these two great religious processes.
Taoism is the philosophical believe that there is a nature practice to the world/universe (as “Tao” means “Way”), and it is harmonious actions aligned with the Tao that are the ultimate truth.  Ironically, it is the first line of the Tao te Ching that states “The Tao that can be spoken of is not the eternal Tao” – in part stating that anything said in words or given a title is not truly the thing being spoken of but instead is a conceptual umbrella that fails to encapsulate all of that which the thing being described is.

Heavy, isn’t it?
Interestingly this fuels the point… there is no mass to this statement, meaning that the term falls short of the intent and instead holds a place of understanding meant to convey a particular concept of “vast”, “large”, “deep” or “burdensome”.  Just illustrating the point.

The ethical framework that Taoism includes is very similar to that which Confucianism espouses, but with a different sort of leaning.  While Confucians would argue for an ordered view of the world, Taoists take the alternate view – that of spontaneity.  As a matter of fact, if someone were to make a broad strokes assessment of these two philosophical approaches, one could seriously argue that Taoism is the antithesis of Confucianism in most things.
The way that Lao Tzu argues for ethical leadership (essentially that a good leader is never known, while Confucius would argue that a good leader is in line with the will of heaven and would be known for that… etc) gives an interesting understanding of the primary ethical viewpoint of Taoism – that of Wu-Wei (or “actionless action”).

When someone is accord with the Tao, they don’t need to take an action as that would be like swimming in the river of the Tao – the river will take you where it is going.  Swimming would be fighting against the Tao, and thus the swimmer is not acting in accordance with the unknowable Tao.

This is just a smattering of the philosophy, which is a comprehensive and interconnected set of ideas that feed and are fed by the others.

Why is Lao Tzu in a Martial Arts focused blog?  Well, a few Martial Arts and other related practices are rooted in Taoist thought; such as Tai Chi Ch’uan (Founded by a Daoist Alchemist named Zhang Sang Fang), Ba Gua Zhang (forms based on the trigrams of the I-Ching, a taoist text), and Hsing-I Ch’uan (forms based on Taoist cosmology – although there are arguments that Bodhidarma founded this style… he’ll have a section later).

This is a major religious practice with philosophical foundations that have permeated through the Martial Arts worldview – as illustrated in many of the Kung Fu Exercise Book’s references.