Generally, whenever someone hears the name “Miyamoto Musashi”, or conjures up an image of a samurai without their armour, this is the kind of image they think of.

This is an idealized image of Musashi Miyamoto, one the greatest swordsmen to ever live – and this is a title that holds true even today.
(Marc Dacoscos did a great biography on Musashi that I thoroughly enjoyed; here, I hope you enjoy it as well!)

He was born Shinmen Takezo in the latter part of the 16th century, in the Harima Province of Japan, to a samurai family.  His father was an accomplished martial artist and swordsman, and considering his skill in the jitte (the Japanese equivalent of a police nightstick), it is likely that he was a policeman or, at the very least, trained policemen and/or palace guards.

Although he was born to the sword master, Shinmen Munisai, and surrounded by samurai early on in his life, Musashi was not raised by his abusive father and would go on to be raised by his uncle by the age of seven.  There are no references to Musashi-san having any teachers in the sword, so it is believe that he learned everything he knew about the sword, essentially, on his own.

He is acclaimed to have fought in over 60 personal, one-on-one, life-and-death battles, many using either a bokken (a wooden training sword) or a carved up rowing oar; these do not include the battles that he participated in!  He is a legend, and as such, there are a myriad of things associated to him, such as:

– He never bathed, because he never wanted to be caught unprepared
– Although fighting on the losing side of the Battle of Sekigahara, he is believed to have left the battlefield (after fighting in the battle) without a scratch
– After a series of one-on-one duels with a particular family, they eventually just threw everyone against him in an ambush… it is said that he walked away unscathed from this as well…
– The day that he died, he knew it was coming and kneeled into a death pose before passing.

There are a lot of things attributed to him, and they all add to the legend.  The bathing thing may simply have been because he was rumoured to have eczema, and consequently was considered less attractive… 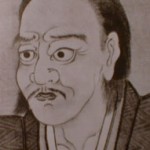 This is a portrait of Musashi… not a very endearing rendition. 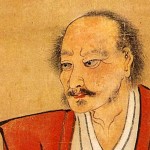 Although, truthfully, neither is this.

Looks notwithstanding, he remains one of the most respected swordsmen of all time, and there are monuments throughout Japan in the places that he wandered, trained, and fought.  There are also statues and other monuments to the man around the cave where he spent the latter years of his life, and wrote the Book of Five Rings (Go Rin No Sho).

He is also attributed as being one of the first to use psychological combat against his opponents as a deliberate attack, using individual personality traits of his opponents against them.  One story has that he was late to a duel, knowing full well that his opponent was a stickler for propriety.  He won, and most likely because his opponent was stymied.  The follow on challenge came from the loser’s brother, and he was also a stickler… so Musashi was once again late.  He, again, prevailed.  The third challenge came another member of that family, and Musashi answered.  The family planned an ambush to take Musashi down; believing that he would once again be late to the match, the ambushers were caught by surprise when Musashi arrived early and routed them all…

Not only was Musashi a great samurai who trained himself and fought personal battles while wandering the country side, he also created his own style of swordsmanship.  This went against the common practices of the day, and would have him taking on a few students, but also bring him into competition with many others swordsmen – such as Yagyu Munenori.  This particular competition was not in the sword itself, but for position.  Musashi-san applied to be the sword master and a political advisor to the Shogun, but Munenori had already filled this position.
The common link between these two was Takuan Soho – a Zen Buddhist abbott who would share in conversations and correspondence with these men.
While Musashi-san was not a religious man himself, he was not an atheist – he just didn’t put any stock in the gods to come and help!  Although the discussions between him and Takuan Soho are considered to be anecdotal, and some would even question if they actually existed, the proof of the connection between Takuan Soho and Yagyu Munenori is evident as these conversations were collected into Soho’s book, The Unfettered Mind.

Ultimately, Miyamoto Musashi’s legend still lives in the popular imagination of not only Japan, but anyone who hears the romance of it all… over four centuries after his death!  Although the survival of his style is in debate, his writing, and his art still exist today…
I guess he’s in good company about the style thing… Bruce Lee only died about 40 years ago, and the authenticity of his style as passed through several generations is being debated… I can only imagine what ten times that time can do… 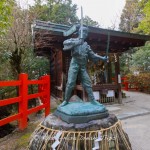 Miyamoto Musashi is one of the best known swordsmen in history, and his legend is the basis for so many historical tales, as well as much of modern entertainment.  Admittedly, Toshiro Mifune was (in my opinion) the best representative of the character… but I’m, admittedly, a little biased. Musashi’s donations to history are without dispute – …