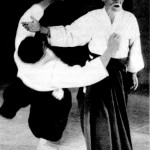 “There are no contests in the Art of Peace. A true warrior is invincible because he or she contests with nothing. Defeat means to defeat the mind of contention that we harbor within.” – Morehei Ueshiba.

Ueshiba Morihei was born 14 December, 1883, to a rich landowner family (father: Ueshiba Yoroku, mother: Ueshiba Yuki), in the region of Japan that is now known as Tanabe.  He is known to practitioners of Aikido all around the world as “O Sensei” (“Great Teacher”), as Morehei is the founder of the art.  Aikido, made up of three syllables in Japanese (Ai, Ki, and Do) that translate into “the Way of Harmonious Energy”, has also come to be known as the “art of peace”.
Master Ueshiba was born during the age where most Oriental martial arts were finding their niche, and began developing into the arts that many of us know today.  He was born during the middle of the Meiji Restoration period, where Japan was modernizing after the end of the Sakoku (the “chained country”) period, and was re-joining the developing global community.  On a side note, 1883 was also the year that Krakatoa erupted in Indonesia and separated one island into smaller islands…
Remembering that Japanese tradition is to put family names first, the man who would eventually become “Master Ueshiba” was once simply known as “Morehei”.

Morihei was a somewhat weak and sickly, which may or may not have had something to do with his inclination towards learning.  Some reports state that he was born somewhat premature, and this was why he capped out at about 5’1″ tall when he was fully grown.  Considering that the average height of the time was just a little higher, he wasn’t really that short by contemporary standards – only in the modern, globalized era would his height be an issue… although his stature is also reported to be imposing; his charisma making him so, despite his size..
He was born into a Samurai family line during an era where all of the rules were changing, and he was still encouraged to train in Sumo, as well as running and swimming – likely as a remedy for his sickliness and perceived weakness.  His family was relatively well-off, similar to how Yagyu Munenori was, and was sent to many different schools to study.  He studied Confucianism, and was taught about the hard sciences, but was also taught Buddhism – which was his bent.  He is reported to have preferred the spiritual paths over the hard sciences, but didn’t really get involved in the martial arts until he was 18 years old – and from there, he never stopped.

After his schooling, Morihei would go to work at a tax office, but found it wanting and returned to his father’s farm in Tanabe.  Apparently his father’s recommendation to join Sumo, and his regimen of running and swimming seemed to have worked, as Morihei (in his youth) was known for his incredible strength! 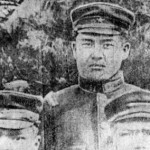 He was called up for military service in 1903 to fight in the Russo-Japanese war; he went on deployment for 18 months, earning the rank of Corporal in that time.  He was recommended to take the military as a career, being well received by his divisional officers and regiment, and earning the rank of Sergeant, but he is reported to have personally felt the weight of the deaths of innocents in this war, so he was discharged after his mandatory service period was over – reportedly sometime in 1907 and, after this, he went back to his father’s farm, got married, and had children.

It was after this time that he also began studying Daito-Ryu Aikijujutsu, earned his teaching certificate and many other accolades, as well as travelling extensively with the founder, Takedo Sokaku.  Morihei would eventually have three revelations – the first was in disarming a naval officer’s bokken without harming the officer; second, when he claimed to have re-envisioned the intent of all of his martial arts techniques; and, lastly, when he had an epiphanic moment and realized that destruction was not the way of the warrior – the true way of the warrior was to defend against wanton slaughter, and to preserve life.

This mindset is very much like Yagyu Munenori’s viewpoint, but with a subtle shift – Munenori would still believe that killing was occasionally necessary to enable another to live, while Ueshiba would reduce that frequency even more to include not harming the aggressor… Master Ueshiba was known, in his later years, to scold his students for not protecting the trees from their bo’s when they trained. 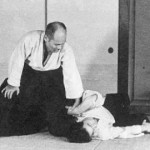 Ueshiba became a pacifist, a decision based in part on his experiences in the military, as well as his revelations.  He spent the rest of his life designing and perfecting the art that would eventually become Aikido.  He originally trained and taught in Daito-Ryu Aikijujutsu, an would eventually make an offshoot that he called Aiki-Bujutsu (“Art of Martial Energy”), later Ueshiba-Ryu (“Ueshiba’s school/style”), Aiki-Budo (“Martial way of harmonious energy), and ultimately Aikido.

(Author’s note:  I did know that Aikido came from Aiki-jujutsu, but didn’t know that Master Ueshiba had gone through so many names before settling on Aikido.  What I find rather interesting is that this website/blog is, in essence, and extension of “Aikibudo” – The Way of the Harmonious Warrior… This syncretism was inadvertent, and I am humbled to feel like I am walking a similar path to him: this tells me that I am on a good one.)

It was through his personal adversity that Master Morihei Ueshiba found his calling and developed Aikido, and it is through that mindset that I believe Aikido prospers even today.  Master Ueshiba taught for many years in Japan, taking on many students – even during WWII, when Japan’s edict forbidding the teaching any martial art!  Apparently, although a pacifist, Master Ueshiba was also a little bit of a rebel…

Here is a video of O Sensei training some students in 1957.  (Post-War, I know – but it is still awesome to watch him teach.)

Without this minor rebellious act, the world would likely have lost one of the most potent – and honourable – martial arts systems.  On April 26, 1969, the man known as “O Sensei” died from liver cancer at the age of 86 and, days prior, having passed the leadership of his system to his son, Kisshomaru.

His poems and writings have been compiled into a book, the Art of Peace, and it is a great read.  His son’s book, the Spirit of Aikido, is wonderfully written and, in my opinion, reminds the reader of the relevance of – and even, the need for – Aikido in modern times.