KFEB #31) A skillful warrior strikes a decisive blow and stops. He does not continue the attack to assert his mastery. He will strike the blow, but be on his guard against being vain or arrogant over his success. He strikes it as a matter of necessity, but not from a wish of mastery.

This particular KFEB entry comes from an anonymous author, but they could either be Confucian or Taoist in mindset, mostly based on the statement of the “Superior Man”.  Remember that both of these belief’s notion of a “Superior Man” is essentially one who embodies the best of humanity, which is reflected here via a direct comparison between the Superior and the ‘common’ man.  When I was young, this particular KFEB entry was intuitive (even then), as (ultimately) the ‘ideal’ solution would be to talk one’s way out of the problem instead of simply swinging their fists to try to resolve the situation.

The quick and intuitive interpretation of this statement is easy to ferret out, but it does gloss over (or oversimplify) a major part of human interaction.  It IS better to talk through a problem than to come to blows about it – this is not a point of debate, in my opinion, but does this KFEB entry cover the spectrum of human interation?  Can we reduce the human condition to two categories of the ‘common’ and the ‘ideal’?
Let’s unpack the problem.

How much baggage does this particular entry carry? Arguably – Lots.  First off – the baggage here is that violence is ‘common’, while debate and discussion are ‘superior’. But I wonder if there are ever times that violence is necessary and the Superior Man unable to discuss their way out…

Is violence ever necessary?  If you dismiss the potential of violence in a human exchange, then you’re dismissing a significant portion of the human condition.  There is an inherent spectrum of violence in every human interaction – whether the threat be negligible or high (IE – friend or family outings, or questionable bar scenario), there is always an inherent potential of violence, as any human is capable of this response (to varying degrees of efficacy, yes… but all humans are still capable of anger and violence).
At the risk of an Ad Hominem argument, have you ever had a situation where you were trying to talk your way out of it, but the person you were talking to wasn’t interested in talking?  They kept trying to push the situation, edging you on into the realm of violence – for whatever reason (saving face, dominance play, bad day…) – and wouldn’t accept apologies, etc.  Although violence may not be necessary in theory, if a punch is thrown, defense is necessary – thus making the use of violence necessary.
We see this more in Hollywood than anywhere else (unless you’re a young, newly 20-something who goes to some of the shadier clubs wherever you are), but it helps with the point.
If a Superior Man moves his lips, then the Superior Man should never have to move their fists – if we took this translation of the adage from a particularly literal vantage point, the Superior Man would no longer be “superior” if they used their fists.
This is why I believe that this particular adage is more of an ideal and preferred start-and-finish point, instead of being about never using violence at all…  This is a Martial Arts blog, after all – where would I be if I completely condemned the appropriate and responsible use of violence?

Just as the Christian Bible holds one of the 10 Commandments as “Thou Shalt Not Kill” (notwithstanding specifics in the translation of the Hebrew word matzoh [murder] to “kill” in English), apparently contradicts David’s killing of Goliath, but is supported by the New Testament’s Jesus statements of “Love thy Neighbour”… it’s a little complex.  Other faiths and cultures have the same sort of complexity, but I use this example as one most people in the west can relate to.

I would argue that what makes someone a “superior man” is based upon their first reaction of (and overall preference to) trying to reason and talk through the issue, attempting to reconcile a difficult situation without resorting to violence… But I wouldn’t say that someone who knew how to re-calibrate their understanding of a situation when diplomacy fails, and attempting to reasonably (although, likely forcibly) ensure the fight ends quickly, with minimal casualties, would still make that person a “Superior Man” under the same Confucian and Taoist interpretations of the same.  Essentially, it’s preferred to not resort to one’s fists at the start of a negotiation or policy discussion – it’s not conducive to a polite society. 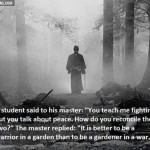 My question for your consideration is this – Is the Superior Man here referring to someone who never fights, or someone who doesn’t resort to it as their first courses of action?

As the picture above alludes, when one espouses peace yet trains for conflict, does that make them less peaceful?  Or is the human condition just not evolved enough to eschew the practice of violence while in the pursuit of peace?

I’m not advocating “an armed society society is a polite society”, but a society that has no warriors cannot defend its peace… If a Superior Man moves his lips, while the common man moves his fists, then does the Superior Man who defends himself remain the “superior” man?

What this particular entry did for me as I was training was that it made me recognize the complexity of conflict.  There are stages of conflict (which I will likely break down in another post), and the earlier stages are when it can be defused – and words are the most powerful weapon in this conflict level.  But if someone who uses their words in an attempt to defuse a conflict, does that make them a ‘common man’ if they are unsuccessful and have to defend themselves?  It’s a tenuous balance between the two points, but one must always strive to not resort to violence – not until all other options have been exhausted…