I want to be my son’s superhero…

KFEB # 90 – What a man dislikes in his superiors, let him not display in the treatment of his inferiors.

So, I’ve tagged this particular entry into the Kung Fu Exercise Book (KFEB) as Martial Arts Philosophy, but also under my “Martial Arts and Parenting” section.  Why, you ask?  Because I believe that this entry is one of the most poignant ones regarding being a parent… But I didn’t originally think this way, but I’ll talk about that in a moment.

This is, as the citation points out, a Confucian quote – which means that it will come with most of the baggage associated with Confucianism, but let’s not throw the baby out with the bathwater!*  We all know what it was like to be a child – whether or not we were raised by our own parents, or surrogates of some sort or another – and we know what we felt at certain times, receiving certain rewards and punishments.  Personally, I was grounded a disproportionate amount to my siblings – but I am the eldest, and was (essentially) the trial run… not making excuses for my parents.  Rather, I am setting the groundwork for my point.  I HATED being grounded – although, no matter how hard I tried to be good, I always seemed to end up there.  Truthfully, that is probably why I am the way I am today – I fight for equality, fairness, and the truth of the matter…
Sometimes I found that my punishment was disproportionate to what I did – remember that I am the eldest of four… you can extrapolate the rest – and I spent a great many weekends confined to my room, restricted to studying or reading.  I, consequently, became a voracious reader… so, something good came out of it all.

I am not going to air ‘dirty laundry’ here, but there were a lot of precursive circumstances that created this situation… and my parents relaxed a little for my other siblings when they got older.  But the point of the matter is that I felt an unfairness in the application of punishment, and I swore that I would not perpetuate or repeat what I considered to be unfair.  I have even extended that idea to my work, seeking out the truth of the matter in every situation, trying to find the kernel of truth from both sides of a situation before taking any other action – which makes me feel like I am giving a fair and considerate review instead of arbitrarily thinking that one side is guilty because someone else says so.

As my girlfriend and I near our impending parental status, I have found myself reviewing my thought processes – a sort of “examined life” process in hopes to be the best father I can be – and remembered the KFEB entry above.  It dawned on me, at that moment, that it isn’t simply about work relationships as I had originally read it when I was younger – it’s also about the most important leadership role ever: parenting.

And, so, I am writing this post – formulating my thoughts, as it were.

How do you figure out how to be a good person?  For me, this is the root to being a good parent.  There are many different points, but I generally go back to the Golden Rule:  either the Buddhism or Christianity – “Don’t do unto others what you wouldn’t want done to you” and “Do unto others what you would have done unto you” respectively. (These two beg an interesting semantic debate which I am sure that I’ll bring up in another post at a later date…)  In many cases, people will go to their baseline – their earlier, foundational experiences of childhood, the ethical stories they were taught, and the punishments they received for doing things that their first social network (read: Parents) considered wrong/bad.  There is a generally accepted social ‘baseline’ that every family will subscribe to; which is my catch-all defence to say that not everyone is equally ‘good’, and environment is a varied factor, but there is a generally accepted norm in every family when dealing with the outside world…

So – if you didn’t like something from how you were raised, don’t perpetuate it.  It’s easier said than done, I am sure, but it can be a guideline.  How many people have said that they don’t want to be like their parents and have said something to their children that made them immediately think “Crap – that was my Mom/Dad right there…”?  This is simply falling back on your own experience… Does it mean that you’ve failed in your mission to be different?  In a word – No… it IS a signal that you shouldn’t dismiss.  Take the time to evaluate the situation and your response, specifically why you reacted the way that you did, and then take the steps to change it.

In my opinion, it’s this willingness to review your own actions and reactions that is the foundational to the Confucian concept – if you don’t like something that someone else has done, don’t do it!  It seems likes such a simple concept, but how many people are willing to review their own actions outside of trying to justify them?  How many people are willing to admit they were wrong on their own review?  Arguably, there are less of these people than those who need external points of view.

It’s not a common practice in most of society, as most people’s review of their actions are generally to justify them… Conversely, Martial Arts (and most other physical training) practices show us that this is arguably something that is NECESSARY for personal betterment.  Everyone has to be critical of their own actions, and be honest about what they thought/did, and think/do… and be willing to make changes.

So, essentially, my thoughts about this passage are rather simple – if you didn’t like it done to you, by your parents or even strangers, why would you do that something to your child?  So, what about physical disciplining, such as spanking?  Generally, people do not like receiving painful disciplinary actions (well, unless you’re into that sort of thing…)  I would argue that there are times when a parent has to do something that they don’t like because it’s the best tool to teach their child – but the provision to this is simple: were there other reasonable options to use before this stage?  This is where I would bring up my concept of a spectrum of appropriate responses.
This is similar to an escalation of force in a conflict situation – could you originally talk your way out of the conflict, or did you immediately resort to violence to solve the problem?  I would not hold a slap to a hand against a parent who did that to stop their child from putting a fork into a socket… I wouldn’t hold it against them if they yelled at their child AND slapped their hand from the socket.  I WOULD hold a parent accountable if they yelled at their child, grab them forcibly when they (almost invariably) do not listen, and then spank them multiple times while continuing to gutturally enunciate the reason they are being spanked.

Where is the appropriate level here?  So, my plan is to use that measuring square to review my thoughts, biases, prejudices, and ultimately actions – hopefully before I do something that I will have to apologize for – to try to be the best Dad that I can.  Will I be my son’s best friend?  Hopefully one day, but not at the expense of being his Dad. 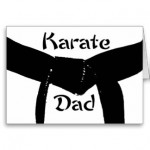 * The baggage that I am referring to in this statement is not a value judgement; instead, it is simply referring to the concepts of the Five Cardinal Relationships (Wu Lun): 1. Ruler and Subject; 2. Father and Son; 3. Husband and Wife; 4. Brothers (Elder/Younger); and 5. between friends.  These are the five relationships that are inviolate – You must know your place in this relationship hierarchy and respect it…  Interestingly, I think I have found another