KFEB #28 – The Master said “Learning without thought is labour lost; thought without learning is perilous.”

KFEB #27 – A gentleman blames himself while a common man blames others.

I have always loved this one, although I never really understood it that much (beyond the intuitive level) when I was a teenager.  I’ve always tried to be a gentleman, and I’ve thought I’d succeeded on many occasions, but it’s not something that is readily available in a modern society; parts of, yes, but there is such a confused definition of what a “gentleman” is.

This KFEB entry was one of the few things that made sense to me while I was seeking this elusive definition, even just for myself.  Although it makes intuitive sense, what is interesting is that this isn’t something that is commonplace in our modern society – just look at the amount of frivolous lawsuits that exist in North America!
Seriously – Why is it McDonald’s fault that you cannot control yourself and eat to obesity?

How many times have you heard someone say something like “I’d take responsibility for such-and-such, but if it wasn’t for so-and-so, I would have been successful in whatever endeavour I’m currently complaining about”?  Or, another pet peeve I’ve developed in modern society, why is it the teacher’s fault that the student didn’t get an “A”?

This is one of those subtle things in life that people recognize as being a positive trait, but it’s getting to be so rare that it should be a superpower!  It’s like common sense! 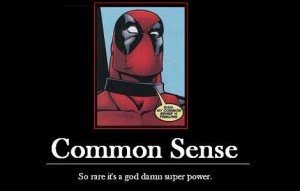 So, this KFEB entry is brought to us by Confucius, even though this doesn’t begin with “The Master said…” or, more colloquially, “Confucius Say…”
As such, this entry is definitely aligned with the Confucian ideal of Ren, or “Humanity”; that concept that believed that people were born inherently ‘good’, ‘right’, or ‘just’ (depending on the translation).  But this can definitely be seen as a distinct line between the common person and the good one, especially when it comes to taking responsibility for their own actions.

As a martial artist, the underlying point here is to take responsibility of whatever level of force that we use in a defence situation – even though we are supposed to use our skills only in self-defence, which is predicated upon someone else’s actions, a gentleman/person would still take responsibility for their actions… without the “but he started it”… that just comes out in the wash, and is the common man’s/person’s catch all.

Just some food for thought.