Blog of the Month – July 13: BruceLee.com 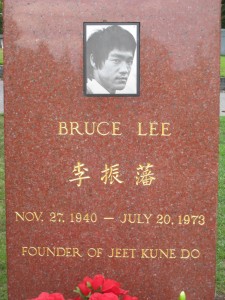 On this, the 40th anniversary of the passing of a legend, I step onto this privileged platform to talk about the Legendary Bruce Lee.  He died before I was born yet he has been one of the single-most influential figures in my Martial Arts training and study.  I have not studied Jeet Kune Do, but I have seen most of his movies and read most of his books and other writings in order to better understand the disciplines I was studying, and also to learn a little more about the enigma that was the man.

I remember many times sitting in front of the television watching old re-runs of “the Green Hornet” and was always waiting to see Kato pull some awesome manoeuvre to save the day… Even then I would ask myself why the Green Hornet was the hero and Kato was the sidekick after watching how the two handled themselves fighting the bad guys.  I had already started on my Martial Arts path by this time, and watching Kato made me feel like I could learn to be a superhero as well… I would eventually be as fast and as skilled as him – or at least that was what my childhood self thought!

But that was the point – even back then, under the bright lights and glitz of hollywood, Bruce Lee was already inspiring not only me, but so many others to undertake the study of Martial Arts.  He would also pepper his movies with classic Chinese philosophy, most of which was completely new to the West and challenged the prevalent thoughts of the day.  Admittedly there are a lot of people who believe that all of these statements were his, and most of them are still attributed to him, but he was bringing his education from China to the Western world.  He as one of the first pioneers that bridged the Pacific after WWII and brought ancient Oriental wisdom to North America in a time when many would still have negative feelings about Japan (which many people of the day couldn’t really differentiate between the two…)

He showed the world more than simply the physical skills that were the focus of North American practitioners of the day – and focused on even more so in hollywood using Judo to bolster their fight scenes with more “exotic” techniques beyond simple pugilism.  He interjected combat with philosophy, and showed us the two were not mutually exclusive.

He was the first “Mixed” Martial Artist, being willing to study the benefits of all of the worlds fighting systems (from Fencing to Boxing and beyond) and incorporate what he considered to be the best of them into his foundational training.  He founded his own style based on all of these studies, eschewing the form (tradition) in favour of the function and getting to (what he considered) the heart of the training.

His ideas were (and arguably still are to some extent) radical departures from traditional practices – most notably his statements regarding fluidity in training, specifically to “be like water”.  I would argue (and have on many occasions) that his concept of “being formless” is founded in his concept of training the form and was meant to liberate people from the rigid interpretation of traditional systems, I don’t believe that this statement was meant to be taken the way that it has ultimately been used over the past decade – but that’s another post.

He was a ground-breaking pioneer always in pursuit of higher understanding and continually challenging the common understanding of the day… Ultimately, I can only imagine where Bruce Lee would have taken us if he had not been taken from us so soon.  He died younger than I am today, yet I am still learning from his teachings…