11) The door of Heaven is Non-Existence.  All things come from non-existence.  The first existences could but bring themselves into existence.  And not existing is just the same as Non-existence.  Herein lies the secret of the Sages.

I remember being a teenager and thinking “um, what?” when I read this.  For years I had tried to figure out its secrets (as, well, apparently deciphering this passage was a key to enlightenment…) and eventually stopped thinking about it for the most part until to this very moment.

Knowing what I know now – and by no means am I saying I’ve cracked this code – I’m able to say a few things about this statement… although, not enough to claim that I can sign my name along the sages of yore.  It’s predominately a philosophical concept, sort of like the “Genesis” statements of how the world was formed etc.  I won’t dive down that particular corridor, but instead will put it more towards a conceptual thought experiment in form.

I do know that this is a passage from the Zhuangzi, which makes it a Taoism based statement.  It is also one of the statements that show that Taoism is rooted in understanding the notion of dualism; a belief of a binary nature to the world.  You can see this in the Taijitu (the “Yin/Yang” symbol) of how one leads into the next and how the nature of one holds a kernel of the other within it – a cyclical movement between states if you will.

It is, I believe, the root statement to the cosmology of Taoism – a sort of justification of how the cycle started, and how it is perpetuated.

How does this relate to Martial Arts?  Interestingly, I would argue that it’s the interaction between these states that teaches someone how to recognize the movement from one to another – ie when a peace is being challenged, or when someone’s centre of gravity is being compromised.

This notion of dualism infiltrates a lot of concepts in martial arts training and practice, such as in the generation of ‘power’ or when action is necessary.  The lesson here is the transition between states – when you are on or off balance for example – and how to maintain your centre; or in other words, you follow the natural way… or the Tao.

Some food for thought. 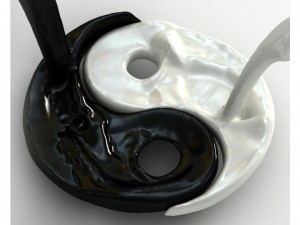